As with all things about living in Ukraine, there are pluses and minuses to their system. Here’s the big plus: You can easily earn 20% on a deposit. Can you imagine that? In the U.S. my money earns 2% if I’m lucky. Often I get just 1% and the banks in the U.S. send me excited emails about it as if I should be overjoyed at earning $3 interest this period. A few caveats, though:

Be sure to declare your deposit and earnings with the IRS. I believe the cut-off is $10,000. That is, if you have less than 10K in a foreign bank, you don’t have to report it. I think. But please check with a certified accountant, or with the IRS themselves.

Next: Beware of unstable banks. I had problems twice when the banks where I had small deposits went under. I felt like I was living in the Great Depression, when crowds of people stood outside the locked doors of banks, nearly rioting, demanding to be let in to get their money. Twice that happened. Not just once. Again, those were for small deposits – local spending money, but still, it’s the principle. But in Ukraine at least for the time being, PrivatBank seems quite stable. 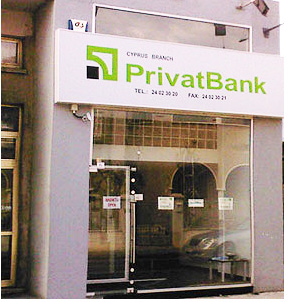 But things can change in a flash. In 2008, in the span of a few months, the exchange rate went from 5 grivna to $1 then jumped to 10 grivna to $1 and eventually settled on 8 grivna (where it still stands today.) Since you can only earn that 20% on deposits in grivna, you need to invest with confidence in the exchange rate. After all, what’s the point of earning a lot of grivna only to have the grivna weaken by an equivalent amount? For example: If you invest 10,000 girvna at 20% (at a time when you can buy $1 for 8 grivna), you’ll have 12,000 grivna at the end of the year. But if the exchange rate changes so that it now takes ten grivna to buy $1, you haven’t really earned anything, dollar-wise.

Related to banking, it’s worth noting that checking accounts do not exist in Ukraine. They literally do not know what a check is, and of course, no one accepts them. It’s a cash economy, though credit cards are becoming more and more widespread. Even then, though, they are almost exclusively pre-paid debit cards, really. You can only spend what you have on your card. It’s not like you can truly buy on credit and then pay your bill the next month.

Finally, almost everyone in Russia and Ukraine pays all their bills by going to the bank. Water, electricity, communal apartment fees, etc…all that is paid by waiting in line at the bank. After all, how else can they pay? They don’t have a checking system here. So if you live here for more than a few months, be prepared to learn the system of bill paying. And though it sounds like a minus, having to go to the bank and stand in line (and it indeed is a big frustration), the plus is: Your monthly expenses in total will likely be less than $20.

banking in Ukraine 2013-08-15
Greg T.
Share !
Previous: Having A Baby In Ukraine
Next: Tips on Buying an Apartment in Ukraine