Warning: You’re about to discover who’s actually writing you “love letters” from that dating agency in Ukraine you’ve been using. If you believe that those letters are being written by the same beautiful women in the photos, you’re in for a shock. 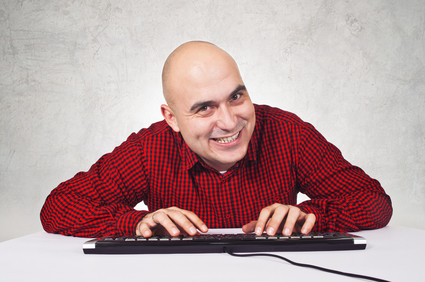 Not long ago I was in Odessa, researching a location where I might possibly open a language school. Prices on the main walking street, Deribasovskaya, were out of my range, so I found myself wandering the side streets of Odessa’s old town. As I wandered, I happened upon a dating agency being operated out of someone’s small, one story home. There was a sign out front, something like, “Odessa Beauties”, and an invite in English to “Please Come In.”

The exterior door was open, though the interior screen door was closed. But a second hand-written sign implored people to “Don’t Knock. Come In Please.”

I let myself in to their “reception” room (a couch, a coffee table with photo albums of women, and a tiny desk with a computer.) No one was in this room, so I called out in Russian, “Hello? Anyone here?”

I heard typing from the next room, and as I took a few steps to the side, I could see…

…a fat man smoking a cigar, typing at a computer. He had headphones on, which is why he didn’t hear me. I should’ve knocked louder. I was indeed snooping at that point. But I took a few seconds to look at his computer screen. He was right by the door, and I could see clear as day:

There were two documents open on his desktop:

* On the left side of the screen was a letter from a (presumably American) man, and his head-shot.

* On the right side of the screen was an email that the cigar-smoking man was writing in response, with a Ukrainian model’s photo as his head-shot.

This fat, balding, cigar smoking Sergei was pretending to be beautiful Olga. Towards the bottom of the email that Sergei was writing, I caught the phrase, “I await your response my love.” Uggh. At that point my guilt overwhelmed me. I stepped back, knocked hard on the wall and that’s when he came out to greet me, his unplugged headphones now draped around his neck. “May I please help you?” he said.

I asked for directions back to Deribasovskaya and thanked him as I left.

Postscript: Okay, so my chance encounter in no way proves that all dating agencies are a scam. It’s one random sample. But I suspect that such a set-up is very common at these agencies. That is, the pictures are fake, and the letters are not being written by the woman you think you’re corresponding with.

2013-07-25
Greg T.
Share !
Previous: Travel Mistake in Russia: Not Bringing Gifts
Next: Think you know what a Russian dacha is?